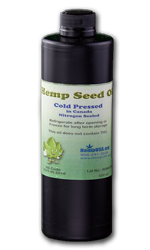 This cold pressed Canadian hemp oil is DARK green with no residue and has a light nutty flavor. It has more GLA content, is natural and unrefined, hand crafted in small batches to preserve the nutritional properties and quality of nature’s most unsaturated oil. The perfectly balanced, polyunsaturated fatty acids provide a naturally packed composition that elevates this oil far beyond basic nutrition. This delicate oil, with a flavorful nutty taste can be used in a wide range of recipes such as sauces, dips, spreads and salad dressings or taken straight by the spoonful. Hemp Seed Oil is herbicide, pesticide and fungicide free and is also gluten free and THC free.

Hemp seeds are the only natural source to boast of having the ideal ratio of EFAs required by the human body, which is roughly 3:1 of omega-6 to omega-3, the two most important EFAs. Flax oil ranks second as a valuable EFA source, but flax seed is not in the optimal proportion. Rather, it has the opposite ratio – 1:3. After about two years of regular use, flax seed can eventually cause omega-6 deficiency symptoms.

By weight, hemp seed is 30-35% oil, of which 80% consists of polyunsaturated EFAs, specifically the two most important ones – linoleic acid (LA – omega-6 at 60%) and a-linolenic acid (LNA or ALA – omega-3 at 20%). These are the parent compounds which build longer-chain fatty acids. LNA then converts to DHA (docosahexaenoic acid) and EPA (eicosapentaenoic acid) – two of the most critically needed forms of EFA and LA converts to AA (arachidonic acid), which has opposite effects of those from DHA.

An excess of AA – the result of too much omega-6 – ultimately leads to such health problems as inflammation and, more importantly, increases blood clotting, which can cause heart attack, stroke, or embolism. In the last 40 years, the American diet has become loaded with excess omega-6 from corn and soybean oil, margarine, and similar processed fats. At the same time, Americans eat 500 mg of omega-3 per day, much less than they need. Consequently, instead of the 3:1 ratio they should be getting, most people consuming the western-type diet, end up with a ratio of 50:1.

Other fatty acids in hemp seed oil include: Palmitoleic acid, Heptadecanoic acid, Arachiditic acid, Eicosenoic acid, Behenic acid, Erucic acid, Lignoceric acid, and Nervonic acid; but it also contains several higher fatty acids. It is one of the only food oils to contain the direct metabolites of LA and LNA. Most notable are GLA (gamma linolenic acid from LA) and SDA (stearidonic acid from LNA), which serve as intermediaries in the formation of longer-chain fatty acids and vital hormone-like prostaglandins in the body. Because of this, hemp seed oil is able to circumvent the impaired EFA metabolism and physical compromise that can result from genetic factors, intake of other fats, aging and lifestyle patterns.

Udo Erasmus is author of the classic book, Fats that Heal, Fats that Kill, The Complete Guide to Fats, Oils, Cholesterol and Human Health This book is a fabulous resource on nutrition. In his book, Erasmus says that the biggest problem with oils is freshness. Unless you get flax oil right from the processor and freeze it until you start using it, it will already have deteriorated by the time you buy it. Hemp oil has the lowest PV (Peroxide Value) of most any oil, meaning it is the least to go rancid and contains more EFAs than flax.

Since manufacturing quality will greatly impact the quality of any oil it is advisable to purchase only the highest-quality hemp seed oil found at HempUSA.org. Although hemp seed oil is expensive in comparison to refined, solvent-extracted or heat-pressed oils, it is far superior in nutritional value.

Large, dark, plump-looking seeds make the best oil. Maximum ripening of the seed and removal of immature seeds are important for the production of quality oil. Typically, whole hemp seeds are put into a special press that squeezes out the oil. Hemp seed oil is best extracted mechanically in a light-free and oxygen-free environment and should be stabilized with such antioxidants as vitamin E, vitamin A or rosemary extract, to prevent rancidity. The package should then be topped off with an inert gas, such as nitrogen or argon, and kept from heat and light.

Many unrefined hemp seed oils extracted by cold-pressed methods vary in color from off-yellow to dark green; at HempUSA.org they have the DARKEST GREEN OIL available and not all have that pleasant, nutty taste like HempUSA.org seeds. HempUSA.org has hemp seeds that are full of enzymes, including lipase and protease. In fact, it was in hempseed that scientists first discovered enzymes. The nutty and buttery flavor taste of fresh hemp seeds is caused by these enzymes.

Hempseed oil is best stored in the freezer. It will stay fluid and does not need to be defrosted. One to 3 tablespoons is the suggested daily intake for adults; children can take half that amount; and breast-fed babies obtain its benefits through the mother’s milk.

According to the FDA, the average American eats 5 grams of trans-fats every day. Trans-fats are so toxic to the body that the FDA is expected soon to require food labels to disclose their content in the nutritional facts panel on packaged foods. One FDA scientist believes that removing trans-fats from margarine would save 2,100 deaths annually in the US, and removing them from just 3% of the cookies and crackers would prevent 5,600 deaths per year. Over twenty years, health costs would be reduced by $59 billion. One way to roughly determine the trans-fat content of a food is to add the number of grams of polyunsaturated, monounsaturated and saturated fat listed in the “nutrition facts” panel. Subtract that from the ‘total fat’ listed. The remainder is approximately the amount of trans-fat in the product.

Most oils – like canola, soy, flax, and fish oils – quickly convert to trans-fats when heated at much lower temperatures for far less time. Even fish, when cooked, can convert its omega-3 to trans-fats. In hemp seed oil, the smoking point is 332°F (165°C), but the oil can be heated to temperatures up to 475°F with no change (for no longer than 30 minutes). Tests have shown that this temperature does not change the configuration of fatty acids in the hemp seed oil as it does in some other edible oils. This ability to withstand heat is quite unique among polyunsaturated fats.

Combining hempseed oil with temperature-stable oils increase the ability of the hempseed oil to withstand heat and provides the most ‘good’ fat and fewest trans-fats from cooking. The ideal oil for this is avocado oil, which has a smoke-point 50% higher than olive oil. It also has a large percentage of monounsaturated fatty acids, which have a positive effect on health. Hemp seed oil may be added to avocado oil at a 5-10% level (3-6 tbsp. of hemp seed oil per quart of avocado oil). This amount will provide a good amount of omega-3 while still withstanding the heat of normal cooking. The use of this avocado-hemp seed oil blend is perhaps the most healthful choice possible, since it will displace the use of other less healthful cooking oils and butter.

The body absolutely requires fat in the diet in order to process such fat-soluble nutrients as vitamins A, D, E, and K as well as phytochemicals. Reductions of essential fatty acids (EFAs) in ultra-low fat and fat-free diets actually cause people to feel hungrier than they did before going on such a diet. It can also begin the process of dangerous EFA deficiency which causes people to binge on high-calorie foods to compensate for feeling unsatisfied. Fat-free diets have been correlated with violent, short tempers in human and animal studies. Such diets can also cause high cholesterol levels because the body produces excess cholesterol in an attempt to make up for the lack of EFAs. Hempseed oil may be thought of as ‘diet’ oil because it contributes fewer calories than most other oils or fats to the diet and because it is so rich in EFAs, vital for cell metabolism. Experts say getting more than 12-15% of calories from EFAs will actually aid in burning off excess fat and thereby contribute to weight loss.

Many people still remain fearful that consuming hemp oil will cause a positive reaction in drug screening tests. Although this was possible at one time, the chances are very slim that could ever happen today. According to Dr. Jace Callaway, a Finnish scientist and developer of the FIN-314 variety of hempseed (Finola), in a personal correspondence, “… in the early days of hempseed processing much of the hempseed oil was taken from Chinese hempseed where the THC (delta-9-tetra-hydro-cannabinol) was typically 1% or higher on unclean seed.” THC levels in those oils varied according to whether or not the seed was cleaned before pressing. Today, almost all hempseed oil is produced from clean, low THC varieties from Canada and other certified sources.

Technically, there is no THC in hemp seed food variety of any kind !!!